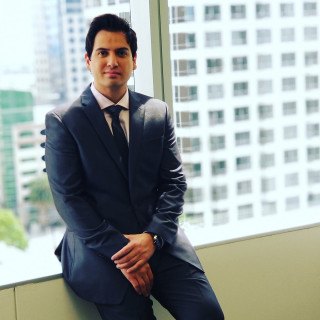 Robert Rădulescu, a lawyer from California, has moved around quite a bit. A native of Brașov, Romania (though his father is from Argeș and his mother is from Covasna), moved to the US with his parents at age 12. After staying in Chicago for a few months, his family moved to Seattle because, as they put it, “Chicago was too big, and too crazy”.

In Seattle he obtained a degree in Construction Management and Engineering from University of Washington. Then he got tired of Seattle’s rain, and moved to sunny San Diego to get his Doctorate in Law from California Western School of Law. After which, he opened his own law firm called Romancore Law.

In October, Robert was selected by Thomson Reuters, a prestigious designation in the legal community, as a Super Lawyer for the upcoming 2022 Award Ceremony. This title is awarded to the top 2.5% of attorneys in each state, based on Thomson Reuters’ rigorous months-long selection criteria, performed by their research department.

Therefore, it’s only natural for Hora in America to be eager to talk to Robert and find out what do super lawyers do, and what is the lawyer’s role in society?

“Generally speaking,” Robert Rădulescu says, “the consumer and the population at large, has a negative connotation about lawyers because they get this impression that lawyers are bringing up frivolous cases. Though, there might be some examples of that, but for the most part, most lawsuits and legal battles are based on merit and genuine disputes in our society. Some of the intricacies of legal battles are not understood by the public because they don’t have a training in the law, so many times the public is quick to jump to uninformed conclusions about the merits of a lawsuit. However, many of the consumer protections we now take for granted are because a lawyer one time fought against a company or an industry. A lot of what protects the consumers and the public stems from a lawsuit that once took place which changed a company’s or industry’s behavior and their business model.

For example, in the seventies, Ford was producing cars with faulty gas tanks. It was brought to their attention that this was very dangerous for the drivers and passengers because the cars could explode. Why did the company delay so long in making these minimal and inexpensive improvements? Simply, Ford’s internal „cost-benefit analysis,” which places a dollar value on human life, said it wasn’t profitable to make the changes sooner. Ford’s cost-benefit analysis showed it was cheaper to endure lawsuits and settlements (for the deaths of people driving their cars) than to remedy the Pinto design. which would cost them much more. Eventually, in large part dues to lawsuits brought against them , Ford got heavily penalized and because it was determined that they acted with intentional malice, they had to pay for their actions. So, a lot of what we take for granted now, it was achieved by lawsuits and litigations. If it wasn’t for them, we would have been less safe.”

Irina VanPatten: Why did you start Romancore Law and why that name?

Robert Rădulescu: I named it Romancore Law because of my roots. We, Romanians, descend from the Romans and I always liked Roman history, and reading about Roman Empire. I feel I am a Roman at the core.

I.V: Your website says that you do both: law practice and real estate. How is your law firm connected to the real estate business?

R.R: They are not connected. Real estate has always been a passion of mine. Even back when I was an engineer, I was also a real estate agent on the side. Back in Romania, my father was a chief-engineer at the biggest tunneling company in Romania (Tunele SRL) with hundreds of employees under him and my mother was a lawyer. But when we came here, they had to start from scratch because none of us spoke English. So, my father had to work at a used tire shop and my mother worked as a caregiver, taking care of elderly. It was a very hard transition, especially at the beginning. My parents sacrificed a lot for my brother and I to bring us here. Because of that, I used the opportunity to give something back to them and help them out.

I.V: Isn’t it hard to be your own boss? You must have a lot of responsibilities when you are in charge of a law firm.

R.R: It is hard. When you own your own firm, you wear two hats: the owner hat and the businessman hat. You have much more responsibilities that you wouldn’t normally have if you were just an associate. Sometimes, you can be a good attorney but not good at business, and that would not be a good fit, but I always was very entrepreneurial. I like to be my own boss. That’s why, I figured, it’s better for me to start my own firm. That way, I would invest all my time in growing my own practice instead of helping someone else grow theirs. Then I can look back and say: “I built this!”

Obviously, it was very hard at the beginning because before I only had internships with federal judges and with the Public Defendants Office. Even though I had a solid legal background, it was still very different when I actually became a licensed attorney. After that point, everything you do as an attorney, everything you put your signature on, it falls back on you. If you screw up, it’s your responsibility.

I was lucky because I had a great working relationship with one of my professors from the law school,Robert Waller Jr., who also had a law practice for about 25 years. I got the highest grade in his class. He respected and supported me. He gave me some work at the beginning. He liked the work I did for him, and when I became an attorney, we partnered on some cases. That helped me a lot because he’s an amazing mentor. Someone I can look up for advice when I need it. To this day, we still work together on some larger, more complex than your usual class action cases, that require a lot more work and man hours.

I.V: What type of cases do you handle? What’s your specific area that you specialize in?

I.V: Can you give us a few examples and what do they mean for the people you represent?

R.R: Class action is a type of case when you have one class of representatives and you sue on their behalf an entire class of people who are similarly injured or harmed by some illegality or conduct by a company or government. Class actions are, essentially, a larger group of people with one person who represents an entire class. Like John Doe versa a corporation. In this case John Doe represents hundreds of people who are similarly harmed by a company. For example, if a company sells a defective product, they don’t usually sell that defective product to one person but to a whole group of people, so, in that way, we represent a whole group of people, as well. There are a lot of requirements to meet the threshold, though. You have to show commonality, technicality, adequacy, among other factors. You have to show that the representative adequately represents the interests of the entire class.

One of my largest class action cases right now are against Western Union and pharmaceutical company Merck. The one for Western Union has been going on for a couple of years now to just classify it as a class action lawsuit. In this case we need to essentially classify the class, which is a very complex work until the judge says: “It’s OK to proceed as a class action.” We are waiting to hear from the court if they would allow that.

You have to realize that Western Union is a huge company, and they have large resources. They hired the biggest law firm out of Chicago to represent them, and also the biggest law firm out of Denver, Colorado because their headquarters are in Denver. We are going against hundreds of attorneys in a very complex case, with million of dollars at stake but we are ready to go up against these giants. A little bit like David versus Goliath.

I.V: Are there any individual cases that you represented that you are very proud of?

R.R: Yes, of course, there are many cases that I handled that I am proud of. They range from business to employment litigation, and personal injury where I made my clients very happy.

I.V: What was the case about employment litigation?

R.R: It was against a pharmaceutical company (I can’t disclose the name). They were, essentially, not paying their employees on time their owed wages. When we sued, we were able to discover that they did that not to only one employee but to hundreds of employees. We’re able to get a very favorable settlement for these employees who worked for this corporation.

I.V: What exactly was the issue?

R.R: According to California Labor Laws, once you terminate an employee, or the employee resigns (gives notice), usually the employer has to pay out all the accrued PTO (vacation time) and wages at the time of separation. If the employee doesn’t give notice, the employer has 72 hours to pay those wages. In this case, the employer waited a month and more before they paid many of their employees’ wages. California has very strict labor laws, and there are penalties if the employer pays the wages later than allowed by law. That’s regardless of what’s in the employer’s contract, because the companies that do business in California should know and abide by law and regulation of the state.

I.V: Do you think that California Labor Laws are affecting the businesses when they make a decision to do business in California or not? Basically, who wins in this David and Goliath battle between labor and businesses?”

R.R: It all depends. It’s very fact specific. California has favorable laws for employees and strict laws for employers but what tips the scale is that these huge employers have unlimited resources, so they can pump up a lot of money into labor defense. Even though, the laws, generally speaking, are favorable for employees, they can find loopholes, or technicalities that they can use to their advantage. It all depends on tactics, skills, facts and a lot of other factors.

Moldovan engineers help thousands of freight brokers and carriers in the US and Canada...