Many musicians are from Russia, former Soviet Union, Poland, Armenia and
Germany. Shen Yun is not an ordinary performing arts company. Preserving the traditions and virtues of humankind is the foundation of our artistic vision, they believe that the classical arts are a window into higher knowledge and even divine inspiration.

Shen Yun Symphony Orchestra invites you on an astonishing musical journey 5,000 years in the making. Reviving Eastern musical traditions through a grand symphony orchestra, this is an experience like no other. Western strings, percussion, woodwinds, and brass accentuate the sound of ancient Chinese instruments like the two-stringed erhu and the plucked pipa.

And what better gateway to this world is there than classical music? A place where the heavenly and earthly intertwine, where we are moved at our deepest levels, and where beauty inspires us to greater things.

That potential is what drives the artists of Shen Yun Symphony Orchestra. In the spirit of classical culture, they strive to wed perfection of self with the perfection of art. We dare say it’s a difference you can hear.

Shen Yun Performing Arts is the world’s premier classical Chinese dance and music company. It was established in New York in 2006 by elite Chinese artists. They came together with a shared vision and passion—to revive the lost world of traditional Chinese culture and share it with everyone. 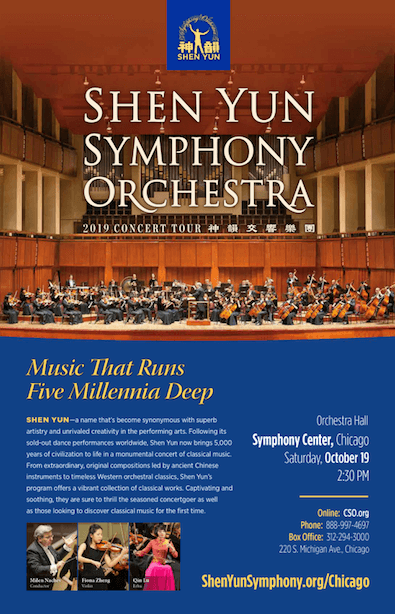 Enter code OAK to waive ticket processing fee, only through the above link.
Free SYSO DVD/CD set will be offered for ticket purchase over $88.
Comentează
Revista online gratuită