Saviana Stănescu is a poet, playwright and Romanian-American journalist. In the US, she is known for incredible plays about immigrants, that are performed in American theaters. Her plays are emotional and full of charm, because they reflect the challenges that Saviana herself had to go through to reach her American dream.

She taught at the University of New York at the Tisch School of Arts is the Drama Department, and is currently a member of the Theatrical Arts Faculty at Ithaca College, where she teaches drama and contemporary theater.

Irina VanPatten: How did you make your way from a Romanian Journalist to a playwright in America? Tell us a little bit about yourself. Where are you from?

Saviana Stănescu: I was born in Bucharest (Romania), but I grew up in Curtea de Arges. After high school, I returned to Bucharest for studies and I stayed there after the 1989 Revolution. I was in the streets with my colleagues during the revolutionary protests, then we lived through the transition period to democracy of the 1990s. It was an extraordinary period. I worked as a journalist and a writer of the free press. Since 1992 I have worked as a journalist for Adevărul, in particular in its Literary and Artistic department. We have collaborated with Radio Free Europe and moderated a talk show at TVRI called Necessary Polemics.

I have published three books as a poet: Love on the Barb Wire (1994), Advice for Housewives and Muses (1996) and a dramatic poem Proscrisa (1997). This dramatic poem was played at the Drama Theater in Galati in Romania, then translated into English and French.

Then one day in 1998, I got an invitation to the Gerard Philipe de Saint Denis Theater in Paris for a Du Monde Entier festival that had selected a play from every country participating in the World Cup. They chose my play Proscrisa. I always considered myself to be a poet, but the French began to call me a „playwright”, until they also convinced me that I was a playwright. I’m joking, of course.

After my experience in France, I decided to study dramatic writing and I went to the International Theater Academy in Germany. There, I wrote my first play in English. Then I returned to Romania and wrote the first Romanian play Inflatable Apocalypse, which in 2000 won the Uniter Award for Best Play of the Year. After 2000, I started getting invited as a playwright to various European countries.

In 2001, I obtained the Fulbright scholarship to study at New York University. Instead of just coming as a visiting artist, I decided to become a student again. I always liked learning and exploring new avenues. I became a student at the Performance Studies Masters at New York University, Tisch School of the Arts. After that Dean Mary Schmidt Campbell offered me a scholarship for an MFA (Master of Fine Arts) in dramatic writing. NYU director and professor Richard Shechner chose me as a resident writer. I wrote for him several plays: Yokastas Redux, a re-imagination of Oedipus’ tales from the perspective of Yokas, and a dramatization of Paul Auster’s novel Timbuktu.

That opened some doors in New York, where the theaters started performing my plays in English. In 2007 my play Waxing West produced at New York’s La Mama Theater received the Innovative Theater Award for Best Play. Various theaters commissioned me, and for a while I was able to live only from writing and teaching part-time at NYU. In recent years, I worked as a professor at Ithaca College. I’m also a visiting fellow in European Studies at Cornell University, because I need more financial stability.

Irina VanPatten: Let’s talk about the play Aliens with Extraordinary Skills, which is now playing in American theaters. Why did you choose the subject of immigration? 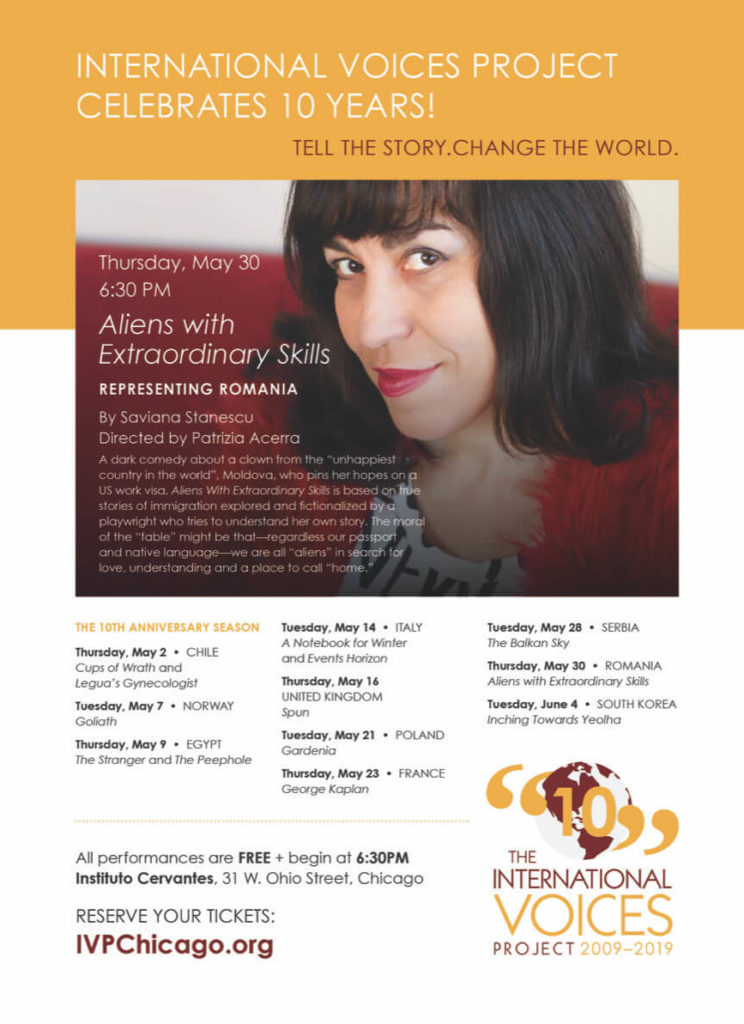 Saviana Stănescu: Most of my American plays are about immigrants, because I personally went through this transition from Romania to America. I have noticed that other immigrants are going through the same challenges as me. It’s a constant negotiation between the new values ​​and the old values of our countries. Plus, I arrived in New York in a very tumultuous year, two weeks before 9/11, when immigrants were looked at with a lot of suspicion. For four years, I was afraid to go home because of the fear, that I would not be able to get a visa to come back to New York.

The English term „aliens” seemed interesting to me because it incorporates several connotations. It can be translated as: immigrants, foreigners, but also as aliens. The play Aliens with Extraordinary Skills is based on a situation with O-1 visa, which is offered to foreigners with extraordinary skills in art, and which I had as an artist. The characters in the play are immigrant artists, but with a different type of visa P-1 for circus artists. In fact, the play was inspired by an article that was brought to my attention by a Romanian friend, that appeared in the Florida Observer about 800 illegal immigrants from Eastern Europe, who had false P-1 visas as circus artists.

This story seemed very interesting to me and I imagined that two of these circus artists were Nadia, a girl from Moldova, and a young man Borat from Russia. When they received their deportation letters, they decided to stay in America and fled from Florida to New York.

Irina VanPatten: Whom did you write this play for? For immigrants of Eastern Europe or for Americans?

Saviana Stănescu: I’m writing mainly for Americans to show them how many issues the immigrants are facing and to shake them out of their entrenched stereotypes about the immigrants, where they are believed to have very simple lives. I wanted to offer complex characters, with love stories and humor, even with elements of dark comedy. I have shown this resilience that immigrants have, when no matter what happens, you just get up and keep on moving.

Irina VanPatten: How do you show the cultural elements in a play, so Americans can understand them?

Saviana Stănescu: It’s a balancing act, like in the circus, when you’re on a wire. You have to give them some specific cultural things, but if you give them too many details, you’ll lose them. You have to give them some references that they can understand, create a universal story that works here and elsewhere. For example, in Mexico City, there was a production of my play, translated into Spanish, and it was very successful. It was played with the same success in Bucharest at the Odeon Theater in Romanian under the title The Clown Visa.

Irina VanPatten: Give me an example of how do you appeal to the American audience, so they can understand?

Saviana Stănescu: For example, the parents of the main character Nadia (a Russian father and a Romanian mother) were circus artists in Moldova, but died in an accident. Here, I introduced the notion that there is a long circus tradition in Eastern Europe. Nadia is proud of her profession. Then I moved her to America with this naivety and belief in the American dream. She believes that everything is possible in America, but slowly, we see how things get more realistic. Nevertheless, she remains with this idealistic dream that America is the land of all possibilities.

Saviana Stănescu: In New York the play was performed by very good Broadway actors, which you can see even on TV. Producers are trying to bring actors, who are connected with the play. The actress, who played Nadia in New York was from here but she had roots in Ukraine. Jessica Pimentel, who is from Dominican Republic, played the role of Lupita, a Dominican Republic character, who has her own American dream of being an actress, but in the meantime, she is working in a strip club as an exotic dancer. Jessica received an award for the role of Mary in the series Orange is the New Black.

Irina VanPatten: How was the transition from Romania to America for you?

Saviana Stănescu: It was a very difficult time for me, because I was alone in New York, without a family. I came to America after the divorce from my husband Alexandru Condeescu, who was the director of the Romanian National Literature Museum in Bucharest, with whom I had a wonderful relationship. But it was also a good thing, because I proved to myself that I can do it. I put all my energy in my career. I had no spare time at all.

Irina VanPatten: Is there anything you would like to say at the end of our conversation?

Saviana Stănescu: I would like to say one more thing. I have a sabbatical semester at Ithaca College, so soon I’m leaving for Bucharest, because it’s a 30 years’ anniversary of the Romanian Revolution. I want to write a play about the Romanian revolution. It seems important to me to write about my life, about our lives.

I would also like to go to Chisinau (Moldova). I have heard that the Theater of the Republic of Moldova is very good and I want to see it.

Written and Translated by Irina VanPatten

The Romanian documentary ‘Acasa, My Home’ was reviewed by LA Times as a war between nature and civilization

Best-in-show Award for in Oil Painting for a Romanian Artist, Mitzura...